The year has begun with the Swindon winter image show.This year we decided to change the appearance of our display.Starting with the cloth we changed this to a dark green which gels with the cream back drop quite nicely.We looked at the table & decided to make some new stands in Jacobean oak with 4 little legs in a Japanese style in differing heights.All told the presentation package was looking good so far.
Read more>>
On Saturday 11th we hired the hall to put a mock up together.As usual we had a varied selection of trees which people kindly brought along & a wide verity of opinions & views on which way it should be put together,which was very helpful & I thank you for all your input which helped us make our minds up on what we were going to display.
The show itself was a great success & most were quite impressed with the presentation of our display.Towards the end of the show we asked Chris Thomas from Celtic Knot to critique our display to see how far off the mark we were but unfortunately Chris was struggling to find issues & errors with the club display except for a couple of minor points which he said was nit picking,but he did say that the display was well presented,it was balanced in proportion a good selection of trees,the scroll gave depth,the cloth,back drop & tables jelled together.Over all really good,we did ask if we were this good what was the difference between ours & the one that won,which in hindsight we should not of asked as it caused a bit of a controversial discussion further down the hall!.I would like to thank all that helped to set up the display & to those that supplied trees etc.At the next meeting there will be a picture on the club board for all to see & critic your selves if you so wish.
Clive H
Dummy run for selection of tree,s ( it,s lonely at the top) 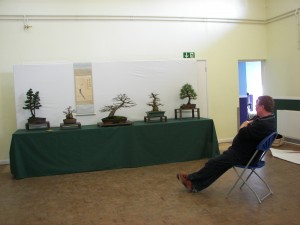 Swindon on the day 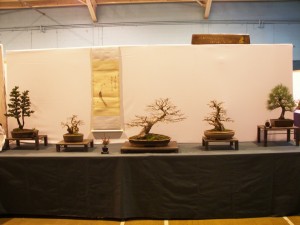 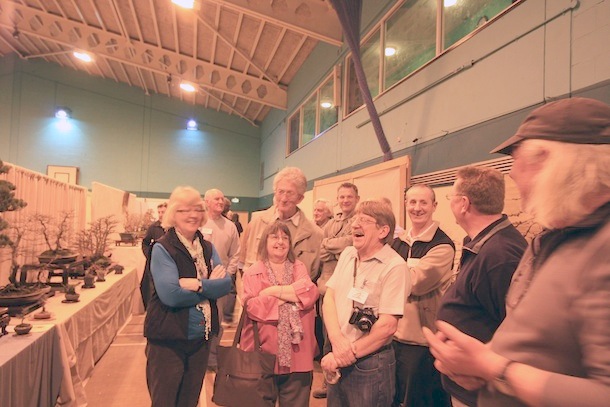 For those that could not attend some more photo,s of the show.