April,s meeting was meant to be a workshop and discussion on feeds.Read more>>> however this had to be changed due to the club displaying at the Wessex Bonsai society show bank holiday Sunday.

Clive H asked for trees to be brought in to have our now familiar dummy run, I appreciate this is always difficult for members to decide what to bring in but as we have proved in the pass  leaving it to what is brought in on show day is a recipe for disaster so Clive H and I pass on our thanks for those that take the trouble to bring in their trees.

Clive H finalised a display you will see a centre stand with nothing on and this was left for Sandra,s group planting ( bit big to bring in on the day).

You will see that the trees are arranged at an angle and not viewed straight on we are trying this because the rooms tend to be narrow and people stand close to the display so by putting it on an angle hopefully displays the trees better for the public.

As you know I have been asking members if they new of any sweeps that could provide coal soot after Simon Temletts demo on dead wood and so far had not had much luck, imagine my surprise when a plain envelope addressed to me arrived and inside was a little plastic bag of the hard black stuff (soot).

Now I went through in my head all the likely people who would send this to me all denied it so imagine my suprise when I walked into the meeting to find a huge bag of the stuff sitting on the floor even more suprising was the supplier was non other than Pat! so there thanks to our new supplier.

I will be bringing in the soot at the next meeting so if you want any bring in a suitable receptacle to take your supply home with you ( I would strongly suggest not to divi up in small plastic bags as you may find it difficult explaining to the local constabulary it really is soot).

Finally we will be displaying at the forth coming Cactus and Succulent show in Melksham which as you know is organised by our own Derek please come along to support see below for more details, we saw quite some unusual cacti last year. 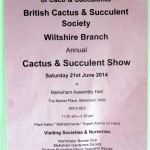