Warminster club has just recently completed 2 good displays, the first was at Newbury which was a new venue in a purpose built display area with lots of room to get about in and with areas away from the displays to work on your own trees which made the day go a lot quicker and made the day more interesting because the people passing through would stop and watch you work and ask question or generally just chat for a few moments.

The second venue was at Salisbury with the Salisbury club on their 25th anniversary. We started the organisation of the display as normal but chose to use the North Bradley workshop evening, where by club members could bring along tree’s for consideration for the display, which was good as a lot of trees where brought along to choose from. The display was chosen and was set for the day.

On the day, the day started well with me forgetting the display plan and then latter Clive that’s the other one he forgot bring the right scroll, so we didn’t have a good start but moving forward we set up the display with the help of Sally, Sandra and Chris Jefferies. Once we had finished setting up it was time for tea on settling down and enjoying our tea we were kicked out side for the judging to take place, not nice experience any way.

It was quit novel to find out while we were outside that all the display stands and individual trees where being judged by Peter Chan, which you all know of and you probably have one of his book as a reference guild.

Anyway after the judging had finished we were all allowed back in to our stands on the way in we noticed that someone had disrupted our stand and dumped stuff on it, what a cheek I though, we’ll have to sort this out but to our amusement Peter Chan whilst deliberating which tree’s were best in show had chosen one of the display trees on our stand for an awarded and the mess was the rosette and award for the best informal upright in show how brilliant was that and what a surprise, and not only for the owner of the tree but to all, so what a great day this has turned out to be for the club.

We would also like to congratulate all the other winners on the day including Tony Oswin and Sally for the wins as part of other clubs displays also thanks to the Salisbury club for the invite to their celebratory day and congratulation on their 25 years, and a big thank you to all the helpers on the day Chris Clive Sally and Sandra for supplying tree’s plants and support. Thanks to Derek for pictures Clive H. 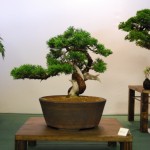