Septembers meeting was a talk by Malcolm on Tokonoma, this was a step away from working on trees and was aimed at explaining to members who had not seen this before as to what is a Tokonoma and what makes a good and bad one.

Members who wanted to take part in the practical were asked to think about preparing before the meeting a Tokonoma consisting of a tree together with accent plant, rock,scroll and stands.

Malcolm along with other members brought in a selection of stands both for the trees and the accent plants, scrolls with inserts and bronze figures as well as individual accent plants to help out anyone who did not have all the parts to make up the Tokonoma.

As I introduced Malcolm I said that this was a good test of putting into practice what Rita and Mark Cooper had shown us at our last workshop.

Malcolm opened the evening by explaining what is a Tokonoma and that right from the start you must have the image in your mind you are trying to convey to the viewer, and that all the components must be sympathetic to that image.

He assembled a Tokonoma and invited comments.

This consisted of a Juniper on a piece of slate raised on a column of wood, a low stone crop accent plant both resting on mats together with a prunus scroll, he then invited us all to comment on what we thought of this.

It was agreed that the wooden column did not work well with the slate either in shape or colour, the mats looked odd and did not ground out the column.

The scroll was more for a winter image yet the display looked more of a summer image, and as one brave member said what image was in his mind.

All laid out to with obvious faults designed to test our knowledge and were we listening.

Malcolm then reassembled the Tokonoma but with an image in mind of a juniper in late summer/autumn.

Gone was the slate with a more sympathetic stand slightly higher than the depth of pot, hard to see in the photo but to the left is a bronze of a dear resting, the scroll was of a branch silhouetted against a watery sun peaking through cloud, the elements now come together as a cohesive image.

I then set up my Larch keeping it very simple , my image was of a weather beaten tree in high altitude and sparse conditions in late summer.

To that end I put my tree on a lower stand using the same scroll but used a rock to the left to represent the harsh conditions, it is surprising how just tweaking the elements can make a difference.

It was difficult to find the right stand for the rock but one suggestion was to incline it upwards facing back into the tree which added some dynamics to the setting, it was also suggested that by raising the scroll it would give a more distant perspective , judge for yourselves below.

Derek then set up his Tokonoma with a Pistachio tree, a narrower scroll and hard to see I know a rabbit surrounded by sand to represent a hot dry climate the tree would come from again simple but very effective. 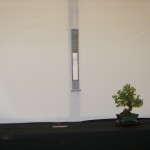 Anthony was the next with a rugged Hawthorn on a large piece of slate with a very low accent plant to reflect the site the tree would have grown in.

Some one suggested just using an accent plant. 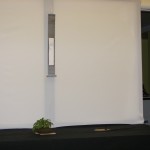 Hard to see but the bronze on the right is a snail crawling up a stem, a Tokonoma in as would be seen originally without a tree.

A almost literati juniper, yes we did suggest a change of pot would benefit the tree Malcolm said it was his training pot? 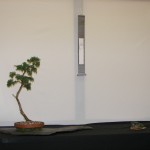 And Anthony who brought in his Japanese Hawthorn. 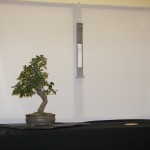 I found it a very interesting evening good to see how much we had learned from Ritta,s talk and how much we had taken in from Malcolm many thanks to Malcolm and his assistant Anthony and to Sally and Derek for their bronzes.

It is difficult to have the right stand,s,accent plants etc to be perfect but I think what was brought in still dislayed well.