This months meeting was a broad demonstration/talk by Malcolm on refining trees both for development and potential showing.

Malcolm discussed his techniques and what worked for him as well as his experiences gained over the years.

Malcolm showed us an Acer he had had for some 25 years during which he has tried it out on various composts, pruning techniques both root and branch and it has remained in basically the same size pot for some years now although difficult to gauge from the photo is only about 12 inches high with still a slim trunk, it is a well hard tree to stand this abuse ( Malcolms words not mine).

One main theme was find the right mix of compost that works for your aspect.

Malcolm then moved onto a mountain maple originally belonging to Anthony who had trained the trunk down to create the image of a tree that had fallen down but had rooted back where it touched the ground, he had given the tree to Malcolm to develope further.

Malcolm explained how he was refining the branches but that this tree could be viewed from either side and it still presented a fine image, this invited some comments on who thought which side best I include pictures of either side below. 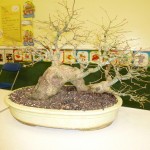 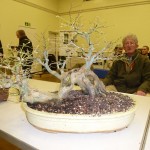 And there was a third viewing point that did extract some comments. 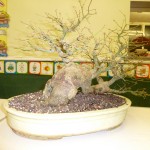 This gives a long view along the trunk.

What ever your views credit to Anthony for creating this style and Malcolm for developing this unusual and very interesting tree.

Malcolm then talked about Junipers and how over the years he has a technique of what he calls creeping up on them and of gradual styling as in not trying to do too much in one go but by spreading it out the tree recovers quicker and does not realise whats happening to it and go into shock, ( this is the shortened version of his talk). 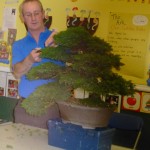 Amelia had been given a fig originally belonging to Manuel to nurse back to health after it had lost a lot of its vigour.

Many thanks to Malcolm for his time.

Credit to Amelia for bringing the tree back to a its full potential, not easy for indoor trees. 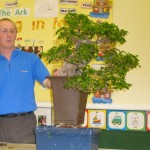 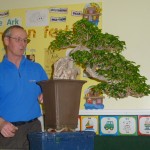 Reminder that May North Bradley meeting will be a week later due to local elections, see pictures below of Aprils meeting. 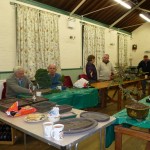 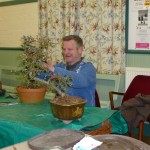 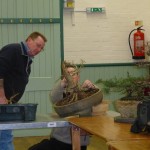 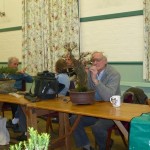 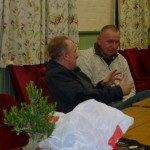 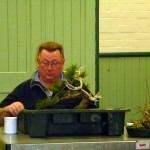 And finally Aprils Warminster meeting will also be a dummy run for the Wessex show always a good date on the show calender so please bring in your trees its a fine chance to have your trees considered for another important show.

And if you are still reading this could I have your deposits £10 for Lees Saturday workshop at the next meeting please.