Despite missing our Chairman and Treasurer, the meeting was very well attended with some 17 members, welcome to our new member Gary Topham. It was nice to see Graham again and Ben and we hope his dad recovers soon. Malcolm bought a few more trees to sell and they were snapped up very quickly and the purchasers were helped in styling them. It was a very hands on workshop and good to see so many people bringing their trees along .

Clive Harber as show manager was called upon to make his now usual and practised decision making on the display which we are putting forward for the British Cactus and Succulent show at Melksham on 15th June.

Thanks to Sally for notes on May meeting. 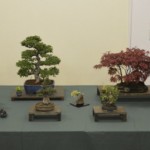 June meeting will be the bring and buy sale as this format was more popular last year and attracted much better material.

Reminder Newbury & District Bonsai Society are holding their Bonsai Roots show on Sunday 7th July and we will be putting on a display.

We only have the June meeting above to have a dummy run this meeting will be busy with our table sales and the dummy run but it should be an interesting evening SO BRING SOME TRESS FOR THE SHOW PLEASE.