The Noelanders Tropy Show 2014 is held annually in Heusen- Zolder in Belgium.

Amelia,Derek Ross and I decided to go this year after weather stopped us last year.  We got to the venue about 11 am after travelling from folkestone that morning, Ross doing the honours as chauffeur this time.  There was a lot of building work going on around the venue, but the inside was fine.  We made immediately for the trade stands, this being the busiest part of the show. The traders were from all over Europe and the UK and it was lovely to see some different items, particularly pots.  There were four rows of traders each offering some very nice items, including some pretty little accent plants. We met up with John Trott, Ken  Leaver, Dave and Mark from Wallsall pots, and John Pitt and Chris Thomas.  After looking around for a while, Amelia spotted and nice hornbeam which tempted her and I  saw a lovely rosemary, but we resisted.  We met up with Tony, WIlf, Chris and Trevor from Warminster, a few from Wessex, Reg and Terry from Swindon and Mark and Ritta Cooper to name but a few.

There were some excellent trees there and some not so, but its all down to preference anyway.  The winner was a Trident Maple with an enormous nebari and was nicely ramified. There was a very good Olive there which also did well. It was nice to see unusual trees like a Pistachio, Tsuga (hemlock.

Unfortunately we were not allowed to take any photos, so I have attached a photo of Mark and Rittas Trident, and the row at the show that included this tree. 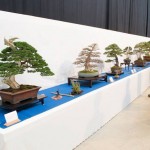