Long overdue a catch up on the previous meeting and hopefully build up some more content with the coming months. Read more>>> The start of the new year is always dictated by the bonsai calendar in that we use these months to carry out repots or first potting with new material and so February was no exception. I like many others have far too many trees at various stages of development and some times it seems like a race to get as many done before the season moves on, so I have to remind myself to slow down a bit and question what do I want to achieve with the particular tree I am repotting. If it is a new tree going into its first bonsai pot when the soil has been removed what are the roots like ? any blackened areas which could indicate decay, look at the base of the tree does it have any crossing /ugly positioned roots and can they be removed or repositioned even more so do I have many roots to play with. I have often found raw material may have very little fibrous root and may have to be pruned far lighter over a couple of seasons to build up the structure, and as we have discussed at many meetings it is a chance to pot on to have the tree in your preferred compost mix. With my previously repotted trees I have taken the chance to look at the pot they are in does it still suit the image should it be changed for different one, also I am now taking the time to stand back from my repotting bench and look at how the tree is positioned in the pot more to the left or right, turning it a bit more to the left or right because it is very easy to miss how the tree has developed especially if it has not been repotted for some years. To the experienced members probably all old hat but very easy to forget when you are pushed for time.

Good to see some new members at this months meeting hope you were happy with the help from the other members as seen below. 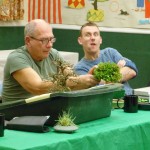 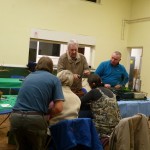 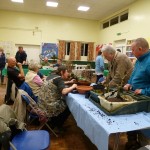 March meeting will again be a general workshop/repotting night and can you all bring in your project Zelkova,s for Derek to update, I understand Sally and Derek will be bringing in some similar Zelkova,s particularly for new members to purchase and enter into the project.